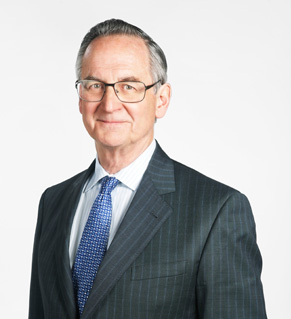 One of Canada's most respected advocates, the Honourable Ian Binnie, C.C., Q.C. served for nearly 14 years as a Justice of the Supreme Court of Canada. When he retired in 2011 he was described by The Globe and Mail as "arguably the country's premier judge". During his time on the country's top court (as only the third modern Justice appointed directly from the bar) he authored more than 170 opinions, including on many landmark cases.

Previously, over the course of three decades, he argued cases in most of the common law provinces and appeared regularly before the Supreme Court on a range of constitutional, civil and criminal matters, earning a reputation as one of Canada’s top litigators.

Throughout his career, Ian has often taken on public service roles as well. In the early 1980s he served for four years as Canada's Associate Deputy Minister of Justice. He was later appointed Special Parliamentary Counsel to the Joint Committee of the Senate and the House of Commons on the Meech Lake Accord. An elected member of the International Commission of Jurists, he has appeared before the International Court of Justice and various international tribunals in governmental litigation matters. He is currently counsel at Lenczner Slaght LLP, and is serving his third term as a Commissioner of ICJ Geneva.

780 Ballyduff Road
Pontypool, ON L0A 1K0
This email address is being protected from spambots. You need JavaScript enabled to view it.