28 May 2019: The Rule of Law: Is it at Risk? The Role of Courts, Human Rights Commissions & Administrative Bodies in Preserving the Rule of Law 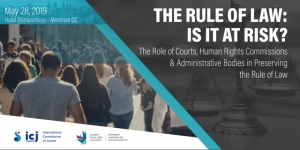 In countries across the world, the rule of law is under threat. What is Canada’s experience? Have courts and administrative bodies been impacted? Join us for an event hosted by the International Commission of Jurists Canada and the Canadian Human Rights Commission.

As stated by former Chief Justice Beverly McLachlan: “...without administrative tribunals, the rule of law in the modern regulatory state would falter and fail.”

Join human rights advocates, jurists and legal experts as we explore the risks facing Canadian judicial and quasi-judicial bodies and preserving independence and the rule of law.

This afternoon event at Hotel Bonaventure, in Montreal, is on the last day of the Council of Canadian Administrative Tribunals' (CCAT) 35th Annual Symposium: Common Challenges, Diverse Solutions: Administrative Justice in a World of Change. This event will take place on May 28, 2019 from 1:45 p.m. - 4:00 p.m.Click here to proceed to the event page for registration.

June 10, 2019: Facing Changes in the Military While Respecting the Rule of Law: Emerging Responses and Legal Issues 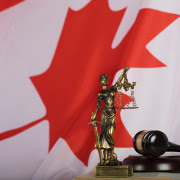 Please join us on June 10th, 2019 for our conference titled "Facing Changes in the Military While Respecting the Rule of Law: Emerging Responses and Legal Issues", co-hosted with the University of Ottawa Professional Development Institute. This conference will be a unique one-day program designed to offer high quality presentations and discussions by leading experts on the following topics:

This conference is eligible for 7 substantive CPD hours, and is eligible to go towards the requirements of the S.E.T. certificate of professional development of the Institute of Professional Development. For more information, or to register for this conference, please follow this link to the event page.

ICJ Canada has published a unique collection of essays on the occasion of the 150th Anniversary of Canadian Confederation. Canada and the Rule of Law: 150 Years after Confederation / Le Canada et la primauté du droit: 150 ans après la Confédération features 35 short, captivating pieces by jurists from across Canada, interpreting the theme in diverse ways.

Topics addressed in the book include the Canadian ‘origin myth’, the interpretation of the rule of law in Canadian constitutional jurisprudence, the relationship between access to justice and the rule of law, the role of members of the judicial profession in relation to the rule of law, and the need for a rule of law that upholds fundamental human rights. Authors identify areas in which our continued vigilance and commitment to improvement is critical for ensuring a strong rule of law, particularly in relation to human rights. Several essays in the book focus on reconciliation between Indigenous and non-Indigenous people in Canada, and advocate for a rule of law that respects Indigenous laws. The essays are written in both English and French.

We intend to distribute this book widely, and hope that it will spark discussions about the nature and meaning of the rule of law for Canadians.

PURCHASE BOOKS THROUGH DONATION to ICJ Canada ($50 suggested donation). All 2017 ICJC members will receive a copy of the book.

Toronto, May 29: An Evening with Canada's Ambassador to the United States, David MacNaughton: "U.S.-Canada Relations under a New Administration"

You are invited to join us in Toronto for an exclusive dinner event with David MacNaughton on May 29, 2017. All proceeds from this fundraising dinner go to support ICJ Canada's work in favour of the rule of law, human rights, and judicial independence.

On November 21, 2016, ICJ Canada hosted a timely and engaging panel discussion in Toronto: "Modern Slavery in Supply Chains: Trends in Global Corporate Liability and Legislation". A continuing professional development event, attendees learned a great deal about the problem of modern slavery, challenges for companies, and legislative responses to the problem. The event featured a diversity of viewpoints, which the lawyers and students present had the opportunity to continue to discuss at a reception following the panel. The presenters were:

If you were unable to attend the event in person, or if you would like to revisit the discussion, ICJ Canada is delighted to share this video of the panel with you:

We received many positive comments about this event and look forward to continued engagement on the pressing global issue of modern slavery.

Beginning with remarks delivered by the Honourable John McKay, Parliamentary Secretary for the Minister of National Defence, the conference featured a range of renowned experts and leaders from the military, security, legal, and media sectors.

The keynote speaker, featured over the lunch hour, was General Jonathan Vance, Chief of the Defence Staff. His engaging comments touched on the new reality of interventions in fragile states, in which the military can play a role in creating a platform for other types of efforts that will together create development and long term stability, rather than short-lived victories.

Other themes discussed during the day included:

All discussions were enlightening and well-received by the audience, made up of professionals from the private sector, including civil society, and public sector, especially the military, as well as academia.

Many thanks to ICJ Canada Council Member Peter Tinsley, former international prosecutor and justice sector consultant, for organizing this highly successful event. Without his efforts, attendees would not have had such a unique learning opportunity.

Exploitative or forced labour, termed “modern slavery”, in supply chains is an increasingly recognized and urgent problem. Discovery of modern slavery in a company’s supply chain can seriously affect the reputations and business of companies and sectors of global manufacturing, and has devastating consequences for its victims.

Ottawa, Oct. 20- The Rule of Law in Whole of Government Involvement in Fragile States

Accredited by the Law Society of Upper Canada for 1 Professionalism hour and 5h35min of Substantive content. Cost: $375 for full-day event, including lunch. Click here to Register today.

ICJ Canada is currently completing a national project examining Canada’s federal and provincial judicial appointments processes in order to address criticisms that have emerged regarding the processes, and to suggest reforms. The project has two aspects. First, we seek to examine and critique the current Canadian process for judicial appointments. Second, we seek to survey current international norms and national processes from amongst leading rule-of-law jurisdictions around the world to identify best practices for adoption in Canada.

Commencing in the fall of 2015, ICJ Canada began gathering information from provincial jurisdictions across Canada on the federal and provincial judicial appointments processes by providing questionnaires to lawyers in five jurisdictions – Ontario, Quebec, British Columbia, Nova Scotia and Alberta. 20 lawyers across Canada have been involved in this information-gathering process and have been reaching out to other members of their respective legal communities. We have prepared an Interim Report setting out the findings we have drawn from the responses received with respect to the federal judicial appointments process. The Interim Report also provides recommendations to address areas that evidently require reform to further advance the principles of judicial impartiality and independence and to promote greater diversity in the judiciary, ensuring it is representative of the communities it serves.

On August 17, the Department of Justice held a consultation on the Interim Report with Vice President for British Columbia Rebecca Robb -the lead on the project-, Board Member from the Atlantic Provinces Professor Richard Devlin, and ICJC President, Professor Errol Mendes. We expect further consultations with the Department of Justice, and continue to advance the project. We welcome any future opportunities to participate in consultation processes the federal government undertakes to address the judicial appointments process in Canada and contribute our expertise in this area.

Read the Interim Report here. We welcome all feedback, which you may send to: info [at] icjcanada.org.

ICJC participated in Global Affairs Canada’s International Assistance Review Consultations, which gave civil society organizations the opportunity to provide input on Canada’s foreign policy priorities. Our concise submission emphasized the importance of the rule of law in foreign assistance activities, both as an end in itself and as a basis for reaching other development goals. As explained, strong legal and institutional frameworks, including fair dispute resolution processes, are the basis for achievements in areas like education, health, and economic growth.

We look forward to learning the outcome of GAC’s consultations, and continuing to be engaged in this area. We are appreciative of Secretary-Treasurer Robin Sully for her work in preparing the submission.